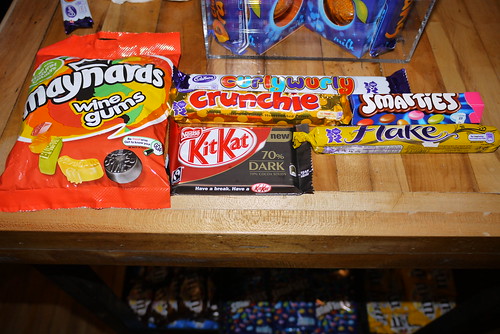 Back in June, I attended an event hosted by The London Candy Company, a British-themed candy shop that opened in NYC earlier this year.  Since it has already become a favorite of British candy lovers. I asked Howie, the store manager, to share their top five candy bestsellers.  Since Halloween is right around the corner, I thought that I would share his picks again…especially since they are having some Halloween-themed specials!  Without further ado, they are…

1. Maynard wine gums – There is no wine in the candy. Rather, it’s a British version of gummy candies.

2. Crunchie bar – This chocolate bar is similar to the texture (not taste) of a Butterfinger, but it is lighter.

3. 70% Dark Chocolate Kit Kat – Initially, they were 65%, but were changed to a higher percentage of chocolate. They constantly sell out.

4. Curly Wurly – These lattice-shaped chocolate and caramel candies are delicious. (I sampled one.)

5. Flake – Howie described this as the “gateway” candy for Americans to start eating British candies.

5. Smarties – Don’t confuse the British smarties with the American ones. Rather, they are chocolate. They are like M&Ms but each one tastes different. Fruit and vegetable concentrates are also used for coloring instead of artificial ingredients.

As you can see, there was a tie for #5. Howie also shared two honorable mentions:

1. Turkish Delight – British customers love this candy. Also, this candy is apparently mentioned in The Chronicles of Narnia, because many of the book/movie fans come in asking for it.

2. Minstrels – These candies are also like M&Ms, but they have a thicker shell. (You can microwave them for a few seconds – the shell will remain crisp, while the chocolate inside melts a bit.)

Just in case you need more treat options, you can look at various sweet (and salty – my preference!) options that I photographed at their launch event. Enjoy!