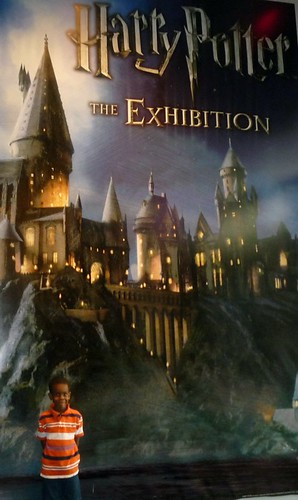 On Wednesday, I took a break from camp work and spent some special time with each of my sons.  Sean (4) was happy with a reading trip to Barnes & Noble followed by a Starbucks cookie treat.  Then, Michael and I went to see the Harry Potter: The Exhibition that is at Discovery Times Square.

I had learned about the exhibit when I was at the Disney dinner at Devi earlier this month. I had a great conversation with Karen who works at Parents. As we chatted, I mentioned that my kids love Michael Jackson (Sean) and Harry Potter (Michael).  On the MJ front, Karen mentioned that Cirque du Soleil was putting together a Michael Jackson music themed show. What really caught my attention though was when she mentioned the Harry Potter NYC exhibit because Michael loves Harry Potter.  (He has read the first three books and is currently reading the fourth.  He has also watched a few of the “not too scary” movies in the series.) I’m so glad that Karen happened to mention it, because Michael was in “Harry Potter heaven” when we visited the exhibit.

Although I went as “press”, I wasn’t allowed to take any pictures. So, my plan was to write down everything that was on display and share the list.  There were so many different costumes and props on display though that this post would take forever if I did that.  If you are wondering if a certain item from one of the Harry Potter movies was there, just ask me in the “Comments”. (The answer is probably, “Yes”.)  I especially noted the following:

1. The interactive elements of the exhibit were the biggest hits with the younger kids.

-A few kid volunteers were giddy with excitement when they were chosen to try on “The Sorting Hat” – which “just so happened” to discern that each of the volunteers should be in their desired Hogwart’s house.

-When visitors lifted up the mandrakes, wild screaming sounds erupted.  (Of course the kids especially loved this and kept pulling them up.)

-In Haggrid’s Hut, there is an over sized chair with a sign that says “Please Sit”.  the visiting kids were especially happy to oblige.

-The quidditch play area in the Quidditch section was one of the most popular spots.  The visitors – adults and kids alike – were determined to get the quaffle ball through one of the hoops.

2. There was an abundance of clothing and props on display from the movie…enough to satisfy practically any Harry Potter fan. Visitors could really appreciate the intricate detail and artistry involved in creating both.  In regards to clothing: casual, school uniforms, robes, Quidditch robes and (gorgeous) Yule Ball attire were on display.  An abundance of wands, books and Quidditch items were some of the prop highlights.  My favorite prop of all came at the very end of the exhibit – Godric Gryffindor’s Sword.

3. I would never survive in Harry Potter’s land without my trusted guide Michael.  For an additional $7, visitors can add an audio element to the exhibit tour.  I owe Michael $7 because he was my personal guide.  (Harry Potter is his “thing”, not mine.) The biggest thing that demonstrated how much I needed outside help was actually the item that attracted my attention the most. “Ooh. This necklace is gorgeous!” I exclaimed.  “That’s Katie Bells’ cursed necklace,” Michael informed me.  “Whoever touches it or puts it on dies.”  “It’s so cute though,” I protested.  “Of course it is cute. That is what makes people want to put it on…” Michael (somewhat) patiently explained.  Smarty pants.

In any event, we had a fun, informative time at Harry Potter: The Exhibition.  The NYC showing is the last North American stop on the exhibit tour, so Harry Potter lovers should be certain to visit before it ends on September 5th. Even if you don’t live in NYC, it is worth the trip for HP fans. There were a lot of people visiting from Philadelphia during our session.  One of the kids was complaining about standing/walking so much. (It does take over an hour to get through all of the props and costumes showcased in the exhibit.) The parent responded to the grumbling kid with a question:  “You want to come to New York City and not walk?!” I just had to smile. Since taking pictures during the exhibit was not an option for me, you can see a glimpse of the exhibit on this short video from Discovery Times Square: