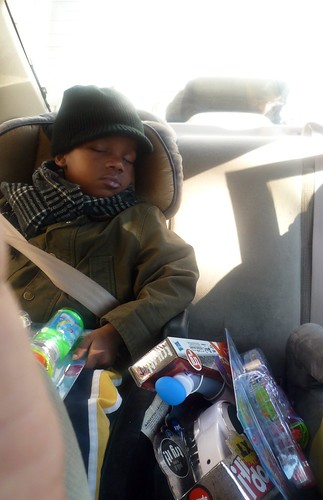 My best Christmas gift was that Sean’s fever “broke” on Christmas night. I get really nervous when it comes to kids and fevers, because I never know if it’s something simple or an indicator of something more dangerous. Well, Sean’s fever was ranging from 103 – 105 degrees from Saturday to Sunday, so I was a bit on edge.

Sean is a pretty good patient when he is sick. Unlike some people in this house (who will remain nameless to protect the guilty), he does not “milk” his illness for all that it is worth.  Rather, he just wants to be up underneath me until he is well…which is totally fine with me. One cute thing was that Sean thought that he would miraculously be all better on Christmas morning. I love little kids. They have such a simple faith. When Sean woke up on Christmas morning, he really was amazed that “Santa” did not leave him any medicine (that would make him instantly well) when he stopped by during the night. “Did you leave any cookies and milk?” Sean accusingly asked me since the holiday cookies that we had made were all gone…as if it was my fault that the miracle potion had not been left. Now this is when the tricky part of neither “confirming nor denying” the existence of Santa kicks in…

“Well, if Santa did come by, I know that Daddy had a box of Chips Ahoy cookies…and there was some milk in the refrigerator.”

My answer was lame, but Sean let it slide. Whew! Can I just say that I’m glad that Christmas is over. Between Michael’s sudden realization that Mary and Joseph were engaged/not married when she was pregnant with Jesus and Sean’s questions about Santa and the “not so wise” wise men, I’m done. Did they ever get married? Michael asked. Meanwhile, Sean wanted to know if the wise men were so “wise”, then why did they mention Jesus to the king in the first place. “That wasn’t such a good idea…” he commented. (Those kids really do make me think more than I would like to at times!)

Anyway, I’m just happy that my little one is feeling better and enjoying school break. “Santa” gave me exactly what I wanted the most. I hope that you received the desires of your heart too!