Well Fed. Well Rested. Well Loved. That basically sums up our mini getaway for our 10th anniversary. We spent the night at the Omni Berkshire hotel in Manhattan. (At the Family Travel Conference earlier this year, I had received a complimentary future night stay at the hotel. Originally, I was going to take a group of girlfriends there for a sleepover since that is something that I would do from time to time before I was married with kids. Thankfully, Reggie had encouraged me to keep it for a quick getaway for just the two of us instead…June has been crazy full, so it was especially good to get a little breather!)

For dinner, we went to Virgil’s – a sentimental favorite. The night that Reggie asked me to be his girlfriend, we went there. The night that he asked me to be his wife, we went there. It was only fitting that we would spend our tenth anniversary there too! The next day we went to The Lambs Club for a delicious brunch before picking up the kids. I tried to be considerate of Reggie (who doesn’t really like for me to take a lot of pictures when we are out at “non-work” events), but I did take a few pictures. I also took a video of our hotel room. (Since an editor at Parents magazine told me that watching a video of a hotel room walk-through on my site helped her to decide to go to a certain resort, I realized how helpful these homespun videos really are!) 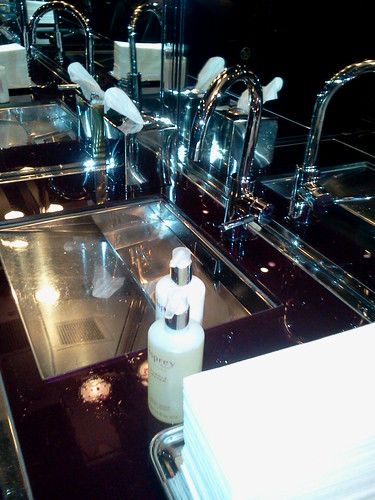 (I also have a thing for bathrooms :-). I liked the one at The Lambs Club of New York!)