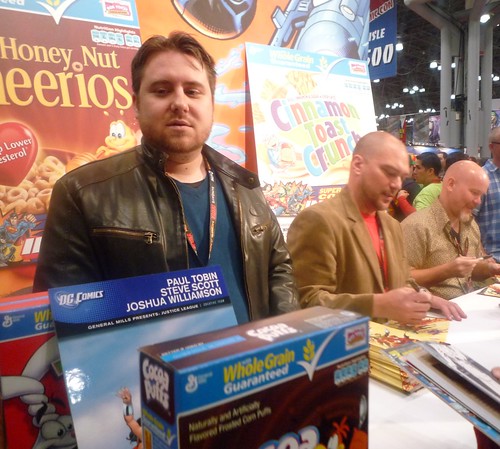 Yesterday, my family attended NYCC Kids, a part of Comic Con, as guests of General Mills and DC Entertainment through MyBlogSpark.  We had heard about the popular event in past years, but we weren’t really “into” comics and superheroes.  Recently, Michael has been enjoying reading comic books. (He gets that from his uncle, who has tons of comic books from when he was a kid and he gifted several of them to Michael.) Also, we have been watching a lot of superhero themed movies lately – Thor, Captain America, Iron Man, Wolverine, etc. – and we’re all eagerly anticipating The Avengers next year.  Suffice it to say, this year was different and we enjoyed the Comic Con experience overall.

General Mills was at NYCC Kids to promote the custom, special edition DC Comic books that can only be found inside their Big G cereal boxes while supplies last.  The writers and artist of the comics were at Comic Con signing the cereal box books that are 24 pages.  Like their father, my kids don’t like cereal but even they expect for there to be a prize in the cereal box.  I like that the comic books are something that they can actually read and keep instead of a little trinket that will be thrown in the trash after a couple of days.   (For the record, I eat Honey Nut Cheerios when I’m in a cereal mood.)

After stopping by the General Mills booth, we explored the rest of Comic Con.  There were so many people there.  I’ve never seen so many grown men and women dressed up as superheroes!  For the most part, everyone was in great spirits and having a lot of fun.  Some of the women must not have received the memo that it was Kids Day at Comic Con though, because they were not leaving anything to the imagination. I think that might be a part of the comic book culture though, because most of the guys didn’t even seem to notice.

As for the exhibits, I must say that Marvel’s “Avengers” stage was the scene-stealer. If that movie isn’t a hit when it comes out next year, I will be totally shocked.  People were jockeying to receive themed tees and posters like they were gold!  There were so many visitors dressed as the movie characters that they took a fun photo together. 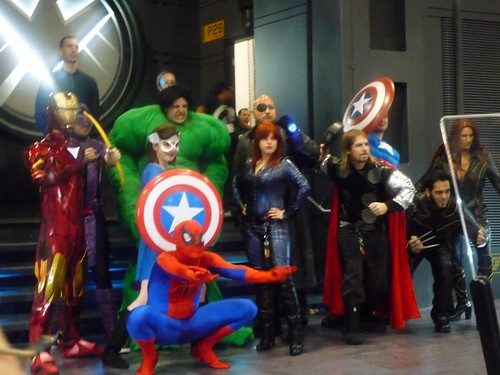 There were also several video game companies exhibiting. The Black Eyed Peas Experience video game that is coming out next month from Ubisof especially caught our attention.  The game was cute and all, but it was the little girl with the tutu (up front) from the audience that had us saying, “Go ahead on, little girl!”

(I will replace this video once I edit out the curse words ?!)

In any event, I’m happy that we were able to attend Comic Con.  It was definitely one of those, “you have to do it once if you live in NYC” moments — especially since people travel from all over the place to share in the popular culture phenomenon that is known as Comic Con! (If you visit the event in the future, then definitely wear comfortable shoes to walk the convention floor.  We went right after church and I was wearing my cute new fall shoes…a pair of wedged ankle boots.  Those boots were definitely NOT made for walking…my feet still hurt!)